The EGLSF (European Gay & Lesbian Sport Federation) was founded in 1989. 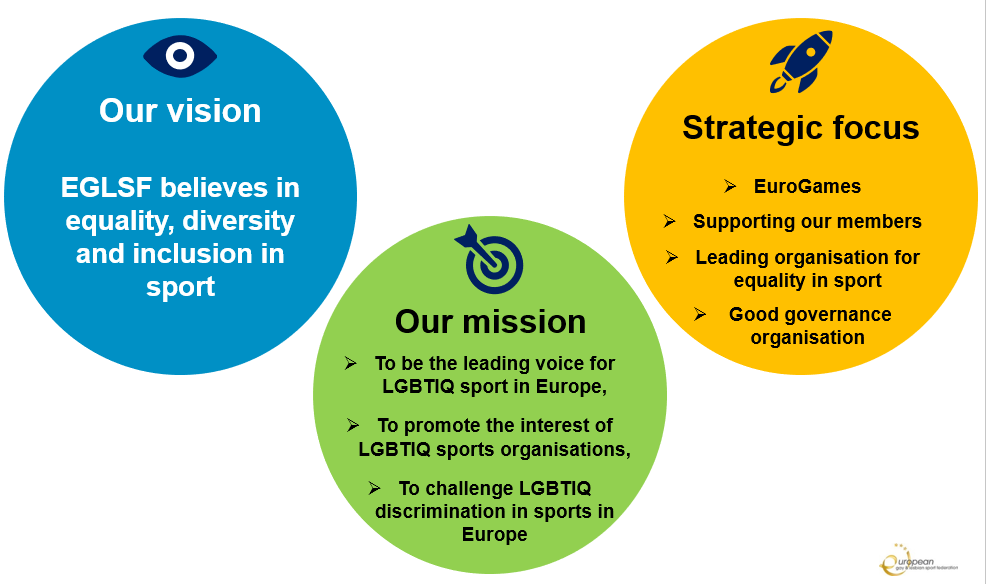 Its aims are to:

We are a federation that represents sport-oriented organisations in the LGBTQI+ community. At the moment this network has more than 22,000 members within over 115 organisations and sport groups. In the EGLSF all member organisations are autonomous: the Federation is operating as a servicing and co-ordinating body.

We promote, amongst other things, the organisation of EuroGames, the European LGBTQI+  sport championships.

Sport for athletes regardless of your gender identity or sexual orientation

Why is it necessary to have special events and sports groups just for this community?

The reasons vary from one country to another, since every country in Europe is different. However, most of us know it is not easy to come out about your sexuality in a 'regular' sports group. Some may even have been in situations where they felt harassed, were called names, or worse. They may have felt that by being gay, lesbian, bisexual or transgender they were not accepted by their fellow club members.

Our sports groups experience the same discrimination when they want to compete in regular events or join existing sports associations. Did you know that in some countries it isn’t possible to rent a volleyball court if you say it’s for a sexually diverse event? We think this is not acceptable. Sport is supposed to be fun and open to everyone.

We therefore need to work towards a climate in sports where people can be what they are, of their own free will, regardless of their self-identifications. The EGLSF works towards that goal, together with LGBTIQ mainstream organisations, like ILGA and others, as well as with European institutions like the European Council and the European Union.

Please Note: It is very important to respect people’s desired self-identifications. One should never assume another person’s identity based on that person’s appearance. It is always best to ask people how they identify, including what pronouns they prefer, and to respect their wishes.